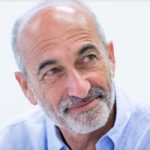 He completes his linguistic and law studies in Thessaloniki, Giessen, Madrid, Luxembourg.

Rodolfo is Certified Head of Terminology (ECQA-TermNet-University of Vienna).

Rodolfo was a translator at the European Parliament from 1981 to 2008 and since 2008 he has been Head of the Terminology Coordination Unit.

Rodolfo teaches terminology at the Universities of Luxembourg and Savoy-Mont Blanc and holds ad hoc courses in various universities collaborating with the European Parliament on terminology projects.

Rodolfo was also Director of International Relations (Thessaloniki ECOC ’97), Director of the Cabinet of the Minister of Culture (2000-2002), Cultural Advisor to the Mayor of Athens (2007-2010) – on secondment from the EP. Rodolfo also covered the role of Coordinator of the Network of European Capitals of Culture (2002-2010), Member of the European Parliament of Culture, Founder and director of the Association «Greek Culture in Luxembourg».