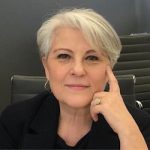 Rita Palumbo is General Manager of WIP CONSULTING SRL, CEO and President of Ferpi Servizi Srl, General Secretary of Ferpi, the Federation of Italian Public Relations, spokesperson and coordinator of ReteCoM, the Network among the Associations for Communication and Management, member of the Board and the Board of Directors of Asseprim Confcommercio Imprese per l’Italia, Vice President of Terziario Donna Milano.

Rita began her career as a journalist in 1976, first as editor and then as correspondent of national newspapers and economic periodicals. In 1992 Rita joined the Mediaset Television Networks covering the role of chief editor of Tg4, of Studio Aperto and of the soft news programs of Italia 1 and Canale 5 channels. Other important stages of her professional career are in the the Group Il Sole24 Ore and in e.Biscom and as coordinator of Il NuovoTg and for the production of formats for TV and Videos on demand.

In 2005 Rita started her career as an entrepreneur and since 2000 has been a professor of Strategic Communication and the didactic coordinator and trainer at ITA Italian Trade Agency-ICE Agency for the promotion abroad and the internationalization of Italian companies.