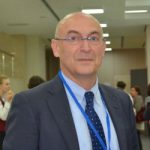 Orlando is responsible for product support services, including maintenance manuals applicable to the company products.

Orlando also chairs the ASD Simplified Technical English Maintenance Group (STEMG), responsible for the development and maintenance of the ASD-STE100, Simplified Technical English Specification (STE).
From a mechanical engineering background, he has always worked for Secondo Mona. After an initial period in the quality department, he moved to the technical publications department where he worked for almost ten years as a technical translator and author. He is in his current position since 1998.
Orlando’s involvement in the STE started back in 1983 at the very beginning of the project.

In 1996, Orlando joined the STEMG as national representative for Italy. Later, in 2000, Orlando became the vice-chairperson and, in 2007, the chairperson. He is a member of several national and international groups, and a member of COM&TEC.